From Aether Wiki
(Redirected from Aether)
Jump to: navigation, search 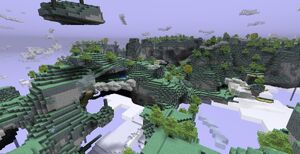 A day-night cycle is fully present and functions just like in the Overworld, where the sun acts as a light source. At night, the moon is the only natural light source and hostile mobs spawn during the night or where lighting is not sufficient.