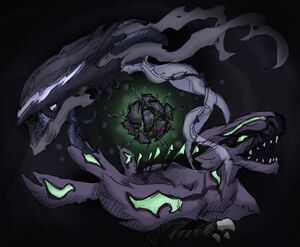 This page lists description quotes for the Blight, which originate from various sources. Sources are in game from the Book of Lore item (in the original The Aether mod) or officially as word of god from the developers.

“After the death of the Sun Spirit, night time returned to The Aether, this was hailed as a push to freedom, and a sign that the Sun Spirit’s rule over society was finally done. But unfortunately, as the darkness rolled over the land, another force gained power.

“The Blight is a microorganism that rapidly infects its host, causing their offspring to be genetically altered, effectively speeding up and guiding the evolution of a species down a narrow path towards aggressive, violent qualities. But the Blight is weakened and eventually killed by exposure to the Sun, so it can only reside in the darkness or at night.

“The Tempest is one example, early in the Aether’s time, before the Sun Spirit, the Blight lead to a new species from the Zephyr, it rapidly mutated into a new beast, that can control electricity using an altered chemical makeup of its silk shell. Around this time the Cockatrice also emerged, a twisted mutation of the humble Moa, it feeds on scraps and carcasses, preferring the indirect attack and gang ambush.

“These creatures survived the Sun Spirit’s rule by hiding in Caves and underneath larger islands, driven from their Blighted Forests as they started to decay in the sunlight, but now that the night has returned, their original homes have started to re-emerge, and with fresh new Blighted creatures to inhabit and spread this mutation.

“The Blight is starting to claim back more and more land every night, and is even starting to approach Angel territory, so it has become a significant concern to the general public, as Blighted creatures ravage any that intrude on their territory and convert any new species they encounter into their own ranks.”[1]