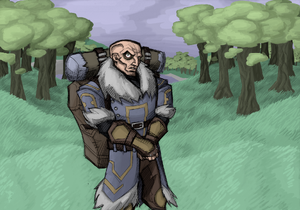 This page lists description quotes for the Edison character, which originate from various sources. Sources are in game from the Book of Lore item (in the original The Aether mod) or officially as word of god from the developers.

“As many “heroes” appear in the Aether’s many kingdoms, there are an equal amount of villainous, selfish individuals that only aim to benefit themselves.

“People who act this way make enemies fast, so rarely do they survive long in the harsh wilderness between the Aether’s main cities, so those who wish to make a home have had to mask their intentions. One man has made a fine living based solely on his ability to deceive, this man’s name, is Edison Wrenk.

“Edison runs a network of trading platforms and expedition societies, purely based in funneling shoddy goods into a huge market without the end consumer being aware of the poor deals they are faced with.

“That said, Edison would not be able to hold a reputation based on poor deals, so his wares are littered with high value items, legendary weaponry, ancient artifacts and useful trinkets. Those who know Edison personally often see through his crafty salesmanship, and cut through to the good deals. They also know that, due to his paranoid and protective nature, you have to meet Edison in person to get the best items.

“That said, even with the masking of his selfish deeds, a few deals that pushed the buyers too far have caused some towns and city districts to become sceptical of Edison’s wares, some banning his trade completely.”[1]