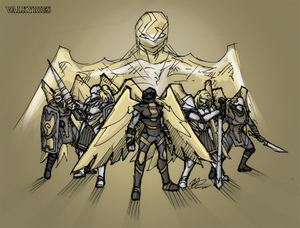 This page lists description quotes for the Valkyrie mob, which originate from various sources. Sources are in game from the Book of Lore item (in the original The Aether mod) or officially as word of god from the developers.

"The Valkyries, magnificent protectors of justice and order, their only purpose is to maintain and uphold the laws laid out by their deity, Arkenzus.

"These laws revolve around the idea of social and natural order, they are designed to root out chaos and keep the world in a state where natural growth can occur. These laws are decided by the High Queen, a Valkyrie born with a unique bond to the “Will of Arkenzus”, what they say is the living soul of their God speaking to them.

"Each High Queen interprets The Will differently, so each Queen’s rule has drastically different rules and regulations, due to these differences, each new High Queen birth starts a new “era”

"Most Valkyries are resurrected upon death, but High Queens are mortal, so they are heavily guarded, usually in hidden fortresses. The Royal Guard, the Legionnaires, are the second closest tier of Valkyrie in terms of connection to Arkenzus, they are tasked with protecting the High Queen and maintaining order over the lower tiers of Valkyrie.

"Valkyries are highly respected among all Aetheric races to be protectors of their common interests, so most settlements contain some form of Valkyrie outpost."[1]