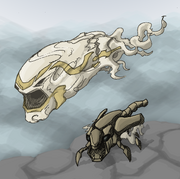 Official artwork for the Zephyr mob

This page lists description quotes for the mob Zephyr, which originate from various sources. Sources are in game from the Book of Lore item (in the original The Aether mod) or officially as word of god from the developers.

"Of the abundance of creatures found in the Aether, none are quite as infamous as the pesky Zephyr.

"Originally thought to be a kind of elemental creature of wind, it came as a shock to Angel researchers to find that the Zephyr is in fact an unintelligent, primitive insect that seemingly possess the ability to control the wind and clouds it surfs upon.

"From their research we learn that the Zephyr just creates an outer shell consisting of a wet, silky substance that latches to Aerclouds, which gives the creature its wispy, cloud-like appearance. Upon inspection, the golden highlights form due to the creature's breathing, creating moist patches on the shell that change its color.

"But something that did baffle researchers until recently was how the Zephyr controlled its signature Wind Attack, where it blows large gusts of wind at predators and prey, throwing them far back and into the air. It turns out this process is all done within the body of the insect, in a pouch filled with varying chemicals including Zanite, Ambrosium and the silky substance the Zephyr makes. It can mix these together with incredible precision to create powerful concoctions that emit large amounts of gas. The Zephyr then brings this mixture up its body and releases it through the mouth, creating a powerful stream of gas.

"The Zephyr has a glaring weakness though: its ability to fly rests entirely on its outer shell, which can be stripped off easily with enough force, leaving the inner insect flightless, confused and vulnerable.

"It is much easier to harvest the Zephyr’s exoskeleton shell in this state. Zephyr shells are used often in weapons crafting, as they can be ground up into a powder that increases the strength of metal blades. This has caused Zephyr hunting to be quite the profitable profession... Even if the casualty rate is quite high."[1]