Brandon is a software engineer and the team lead at Gilded Games and has been programming for the Aether II: Highlands release. He lives in Australia.

Brandon's original idea of The Aether came from a Minecraft Forum thread from user GreyAcumen that stated about a different dimension that was opposite to the Nether. Brandon (only him at that time) approved of this idea, and slowly started to work on the early-alpha version of the mod. Progress of the mod was starting to accelerate as he started to ask for more developers to help with the mod. But from August 23, 2012 to November 5, 2012, a substantial amount of fans thought that The Aether was no longer being worked on due to the lack of tweets from their Twitter page and inactivity of their Facebook Page. Then a day later, Brandon posted a tweet, stating that The Aether was not dead and that they were working on a sequel, The Aether II. 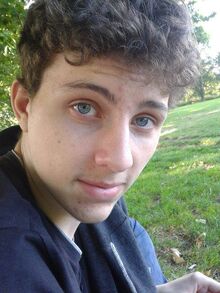 Development of The Aether II was long and erratic at first. With team members leaving and new ones coming in, it was very hard for Brandon to make progress. One of the first things he needed for The Aether II was a creative team, so he asked for a concept artist. There was a lot of fighting between fans for a position on the team and in the end three artists were chosen: SirStylus, ThePumpkinSpice and Oscar Payn.

At first only SirStylus and TPS's artwork were shown on the page, leaving Oscar Payn to upload his as pseudo-fan art. SirStylus first uploaded a concept for a mob that utilized the new constant day/night cycles in The Aether and TPS uploaded concept for a bird mob. Since then, these two artists have not contributed and have been dropped from the team. Oscar Payn is the only remaining artist out of the three.

Brandon went on the hire Jaryt, a young programmer with experience in modding for certain users' personal use. He had since become one of the head developers of The Aether II. Jaryt and him often livestreamed development of The Aether II near its release to let people more directly see how far along it was.

Near to release Brandon decided that the fiction of The Aether that he and Oscar Payn had developed needed to be further expanded and articulated. He hired Liberty, the lore writer, for this job. Liberty then served as a key part of development as he created and expanded ideas. Furthermore, Oscar's brother Hugo Payn joined the team, who happens to be great at architecture design.

On July 23, 2011, The Aether mod was released to the public and on June 10, 2013, after nearly ten months of the team staying up nearly 3/4 of the night, fans constantly asking for a release date, and all of the rumors on the MCForums, the sequel to The Aether I was released and named "The Aether II: Genesis Of The Void".[1]

Even prior to the mod's release on June 10th, many famous YouTubers like Mr360Games[2] uploaded alpha footage of the mod showcasing many of the mods features. About a month later, he did a commentary with him,[3] which was when Brandon mentioned that the release date was probably going to be within a couple weeks, which got many fans excited. Now many YouTubers upload gameplay footage of the mod like DeadloxMC, ChimneySwift11, AntVenom and ClashJTM.