Golden Swets are a mob similar to slimes in appearance, except for their golden color. 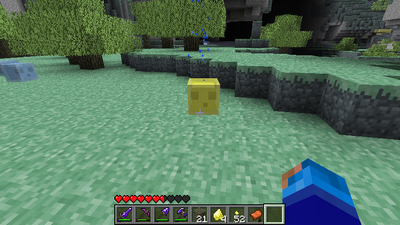 In v1.01, Swets and other mobs have a much lower spawnrate, sometimes not spawning for 1000's of blocks.

When the player is about five blocks away, the Golden Swet will jump towards the player rapidly. If the Swet impacts the player, it will despawn and the player will be launched into the air, inflicting damage upon landing. When killed, it will drop anywhere from one to five glowstone.

Golden and Blue Swets can also be found as Gummies in dungeons. When eaten, they heal all hunger.