From Aether Wiki
(Redirected from Structures)
Jump to: navigation, search

Generated structures are sets of blocks that intentionally generate in a specific fashion, often to form a specific structure or geography. 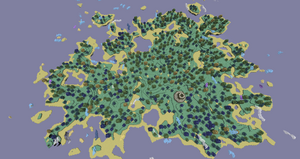 Floating islands are the main structures generated in the Aether and typically are the same in size. They spawn on a grid system, so islands are always guaranteed to be a set vague distance from each other. 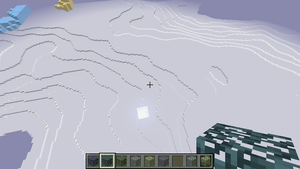 Aercloud blankets are multi-layer large expanses of Cold Aerclouds that always line the bottom of islands and act as a 'safety-net' to catch the player in case of a deep fall. Holes of varying size are common to them. 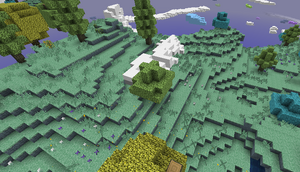 Hills are similar to mountains and are defined by drops in elevation and slopes. Unlike mountains, hills are almost always guaranteed to be traversable to their lowest point. This is because there is always a section on each level where the next slope can be climbed without having to place blocks. Exceptions to this rule are rare. 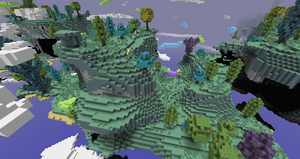 Mountains are geographical features defined by steep slopes and cliffs and can be very high in elevation. 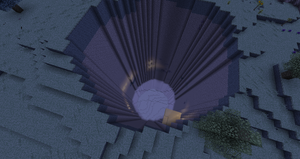 Terrain exclusive to the Magnetic Hills biome, Chasms appear as deep holes throughout said biome. They may or may not be bottomless and/or contain an Aercloud layer at the bottom and commonly have ore in their exposed stone and often their interlinked Pillars above them, whether floating or rooted. 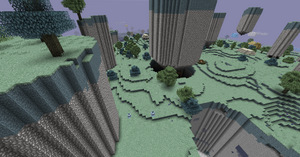 Terrain exclusive to the Magnetic Hills biome, Pillars are large mini-islands that are very flat and spherical in shape. They semi-commonly accompany chasms whether rooted or floating, and may contain ore or trees on top. 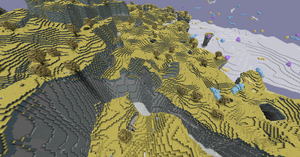 Terrain exclusive to the Irradiated Forests biome, Ravines appear as large and deep crack-like recesses throughout said biome. They may have Aercloud blankets lining the bottom of them and the walls of them may contain ore or Mossy Holystone. 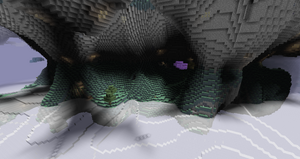 Terrain exclusive to the Forgotten Highlands biome, Inverted cliffs appear as large cave-like recesses under the edges or cliff of most of this biome's islands. They commonly recede under the Aercloud blankets. 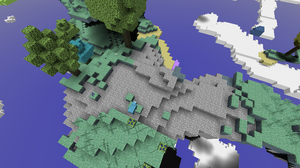 Basins are large stretches of land where rock is exposed, and often has mineral veins exposed as well. 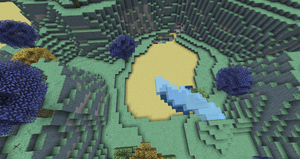 Quicksoil patches are composed of small and minimally one-block deep stretches of Quicksoil and may be found uncommonly throughout towards the mainlands of the Highlands biome. 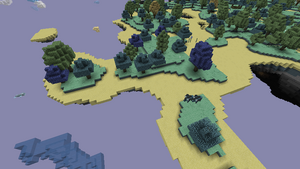 Coasts are composed of minimally one-block deep stretches of sand-like material and typically line the fringes of islands. Most biomes use Quicksoil coasts, but Magnetic Hills generate with Ferrosite Sand and Arctic Peaks generate with Highlands Packed Ice. They may vary in size from being a few blocks wide in range to covering significant portions of island surface. Highlands and Arctic Peaks biomes may generate as a megacoast variant, and Forgotten Highlands lack coasts of any kind. 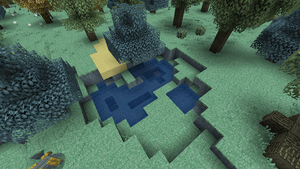 Bodies of water are recesses or holes of the ground filled in with water. They may very in size from small and only a few blocks wide to being massive in depth and size. 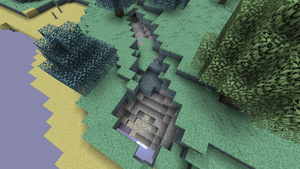 Caves are underground structures generated in the Aether and are generally like their Overworld counterparts and sometimes contain generated veins of ore. Most island biomes may contain an entrance or two to a cave. They are defined as spaces of air blocks underground, leaving exposed Holystone and other types of blocks, such as ore. They may range in depth and scale, whether being tiny pits barely considered caves or be winding massive chasms that all the way to the bottom of islands.

Other types of caves that generate in the Aether besides the general normal kind include circular chasm bowl-shaped ones and ravines (exclusive to the Irradiated Forests biome). 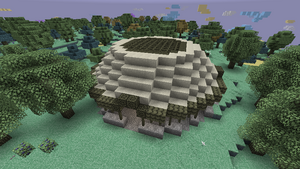 Outposts are large generated structures comprised of various Holystone and Skyroot materials and every island will typically generate with one. They generally keep the same structure basis but may spawn as flat or tall versions. They serve as the spawnpoint for the NPC Edison. The Campfires are used to respawn players on death, choosing a bed (if placed) or the nearest activated Campfire from the player's location upon death. 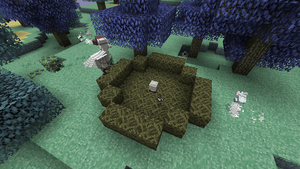 Moa nests are naturally generated structures that serve as spawnpoints of Moas in the Aether and are placed by Orbis. They are made out of Woven Skyroot Stick blocks. Moa nests can generate either on the surface or in trees and will always generate with two adult Moas, one Moa child and one Moa Egg tile entity. Moa nests will always generate with full support under them if spawned on the surface but will only generate in green skyroot trees if generated as tree nests. 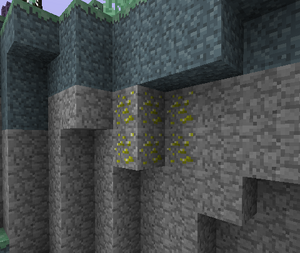 Mineral veins are natural deposits of ore and can be came across in cliff faces, under islands, etc. Minerals only generate in stone. Mineral veins can overlap or overwrite each other, making it seem like one cache of mineral is made of more than one type. In the Aether, there are ambrosium, arkenium, gravitite, icestone and zanite. 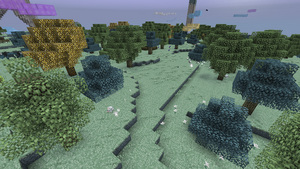 Trees are natural resource-based structures created by Orbis or by players via growing saplings and are made out of logs and leaves. They range in size from short and tubby or larger ones that may take several seconds to harvest all the way to the bush. 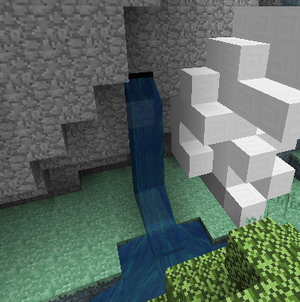 Springs are natural blocks of liquids that act as a source of their respective fluid. In the Aether , only water springs are found. 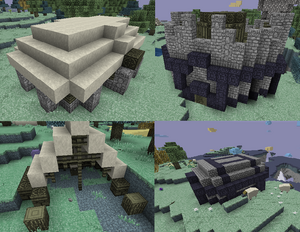 Dwellings are small uncommon structures that may generate on islands. They are always empty, containing no inhabitants and can range in design from small shelter-like huts to general-sized house like settlements. Dwellings typically generate with Skyroot Chests, which always contain no loot. 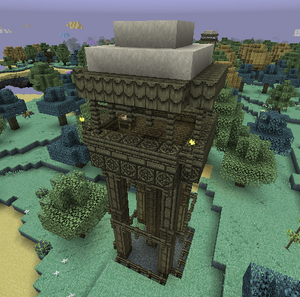 Skyroot Towers are uncommon natural generated structures that may spawn on an island. They may serve as a good vantage point for exploration, given their above-average structure height. 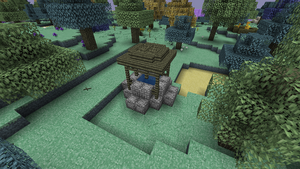 Wells are natural generated structures that may uncommonly spawn on an island and serve as a source of water. They are comprised of decorative Holystone Brick blocks, Skyroot planks slabs and fences. Due to them housing 2x2 spaces of water, the water contained within well structures is effectively renewable. 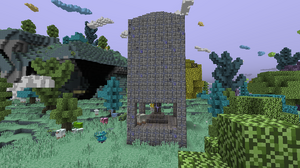 Dungeon entrances were naturally-generated structures that led to instances of Slider's Labyrinth dungeons. Inside of them were totems that teleported players to said dungeons and were usually signified by a distinct humming noise and partially being made out of glowing blocks. 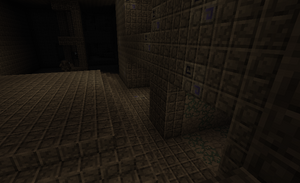 Slider's Labyrinths were the main dungeons of the Aether II mod and were large and expansive, full of dangerous monsters and loot. They generated in their own dimensions and each one was it's own separate instance.